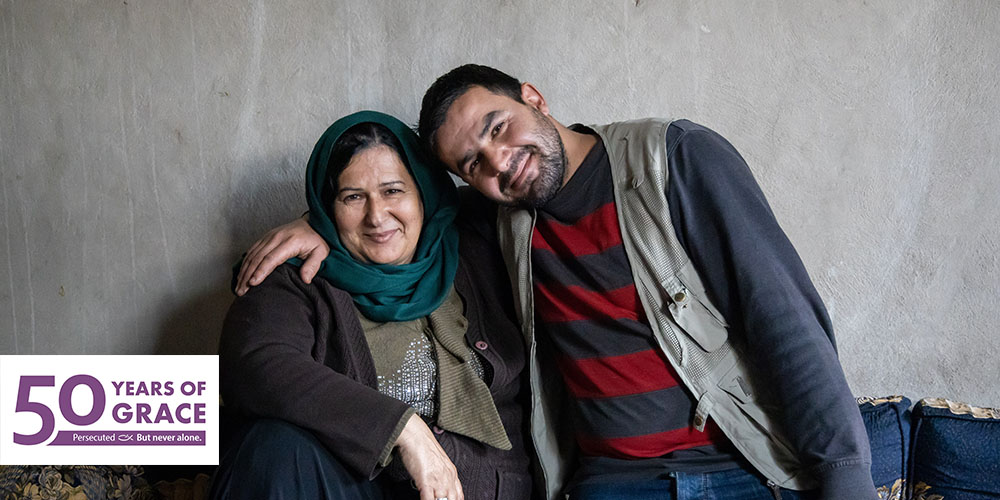 Open Doors Southern Africa is celebrating 50 years of existence on Monday, 10 May 2021. For the past 50 years, this ministry organisation has worked with the Church in Southern Africa to strengthen and support persecuted Christians in numerous countries all over the world.

Open Doors Southern Africa is part of the Open Doors International ministry, which serves persecuted Christians in more than 65 countries across the world by delivering Bibles and Christian literature, visiting persecuted Christians, discipleship and training, offering emergency aid to victims of persecution and natural disasters, and speaking out and raising awareness through advocacy.

Open Doors International was founded in 1955 by Brother Andrew, a Dutch missionary. Brother Andrew made numerous trips to encourage Christians behind the Iron Curtain, smuggling Bibles into Eastern Europe in his Volkswagen Beetle. Today this ministry has expanded to more than 65 countries.

As part of the 50th celebration, Open Doors Southern Africa is hosting a special event at Northcliff Union Church in Randburg on Saturday, 8 May. The full programme of festivities includes praise and worship, inspirational messages and testimonies from the persecuted Church. A live performance by the popular singer and Open Doors ambassador, Loyiso Bala, is also in the line-up.

If you have been involved in this ministry, curious about the work in the persecuted Church or hungry for a spiritual event – make sure not to miss this once in a lifetime celebration. More information is available at www.opendoors50.co.za.

In March 1971, Francis Grim of Hospital Christian Fellowship invited Brother Andrew to South Africa and organised a countrywide tour for him to talk about his work. A few weeks later Brother Andrew visited South Africa again to discuss the establishment of an Open Doors ministry in Southern Africa with a group of local Church leaders.

An official board was selected for the new organisation and in July 1971, Open Doors Southern Africa’s first office was opened in the Johannesburg home of Reverend Koos Driescher, a minister in the Dutch Reformed Church. With the help of voluntary workers, the first 12 000 news sheets were posted to introduce Open Doors to the public.

Open Doors Southern Africa arranged its first overseas outreach in 1972, when a group of 70 young Christians from South Africa went to the Olympic Games in Munich, Germany, for an evangelistic outreach.

This was followed in 1973 by a tour of 16 countries to visit and strengthen Christians in the Far East, and take financial contributions from South African Christians to them. Today tours to the persecuted Church are an essential part of the Open Doors ministry.

Various outstanding projects were launched over the years, like Project David to help illiterate people in Angola and Mozambique receive the Bible message, and Project Timothy which helped train indigenous religious leaders to understand and communicate the Bible.

In March 2005, the South African head office relocated to Randburg – the premises from where it is currently still operating. Since then other highlights were Project Wave of Hope, which was launched to help victims of the tsunami in the Far East; Project Y-me, which was launched to support the youth in the Middle East; Project Desert Light to support persecuted Christians in the Muslim world; and most recently, Never Alone to assure persecuted Christians all over the world that they are not alone in their battle.

Success story of the SA base

Jan Gouws, executive director of Open Doors Southern Africa, says the success of the South African base would not be possible without the support of faithful partners and volunteers, who have stood with their persecuted family in Christ through their prayers and support all these years.

“We want to thank all our partners and volunteers for their prayers and support throughout the years. Our success story wouldn’t be possible without their help.

“Looking back on the past 50 years, the Lord’s grace and faithfulness is evident in the way that our ministry expanded over the years – from a humble beginning to a strong ministry that helps our brothers and sisters all over the world with prayers and support. This milestone anniversary is testimony to a half-century of service and support to the persecuted Church all over the world.

“We stand in awe of the Lord for His provision and guidance in Open Doors’ ministry to support and strengthen our persecuted family in Christ. He helped us to live as the Body of Christ for 50 years of grace in serving the persecuted Church,” he says.

Be part of the birthday celebrations!

Open Doors will celebrate this milestone anniversary with a special event at Northcliff Union Church in Randburg on Saturday, 8 May, from 08:30am to 12:30pm. The full programme of festivities includes praise and worship, inspirational messages and testimonies from the persecuted Church. A live performance by the popular singer Loyiso Bala, who is Open Doors’ ambassador, is also in the line-up.

Tickets for the event are sold at only R100 per person. Alternatively, people who cannot attend the physical event can follow the programme online at R50 a ticket.

To book your tickets for the physical or online 50th birthday event, visit the website www.opendoors50.co.za. The website also contains more information about Open Doors Southern Africa, its ministry and other special events to commemorate its 50th anniversary.