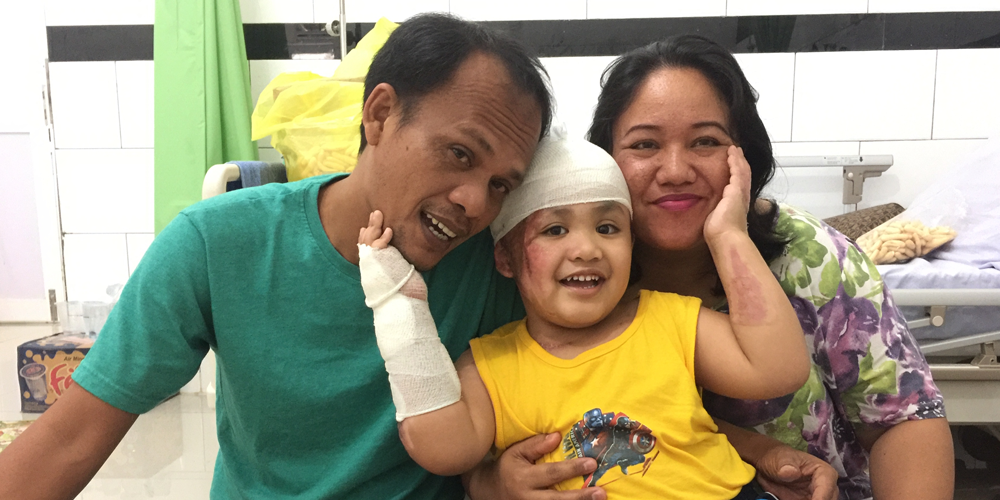 Alvaro (now 5) is one of the children that were wounded in a church bombing in Samarinda, Indonesia on the 13th of November 2016. He suffered severe burn injuries on half of his head, neck and hand. Alvaro has already undergone as many as 26 surgeries in a period of just six months…

Most recently, after 10 hours of another skin patch operation, Novita and her husband could finally heave a sigh of relief, as Alvaro (their only child) no longer needs further injections and surgeries for his scalp.

“It [is] always stressful for me to watch him go through all those procedures. I had once asked him whether he wanted to stop because, I could not bear to see him suffer before, during, and after the operation. But he is so much stronger than I am. He told me, ‘It’s alright, Mama. I am okay. I can bear the injections, as long as it takes us home to Samarinda, better and faster!’ He is such a brave and strong boy,” said Novita, proudly, on the day after the operation.

The third, and final, scalp skin patch operation on 3 September in Kuala Lumpur, Malaysia, means that Alvaro’s scalp can now grow hair normally again like before.

“We are breathing a little [easier] now as one more dreadful phase has passed,” she said, smiling, but still looking weary, during a video call session with Open Doors co-workers. She has been juggling between her job in Samarinda and being with Alvaro in Kuala Lumpur for the last eight months. Her husband has quit his job to help care for Alvaro full time.

During the call, Alvaro was sitting on his bed, a bit quieter than usual, but still giving his best smile, saying, “Thank you for your prayers. Jesus bless you!” His head is attached to tubes after the operation, to allow for drainage. So, he could not move freely and could only lie down on one side of his body. It will take a few days for him to be his usual self again.

His journey to complete and full recovery is not over yet… The doctors are currently discussing the next step, which is to repair his fingers and the scars on his face. Please do keep praying for Alvaro, his mom and dad as they take each step next step in this continuing process of recovery.