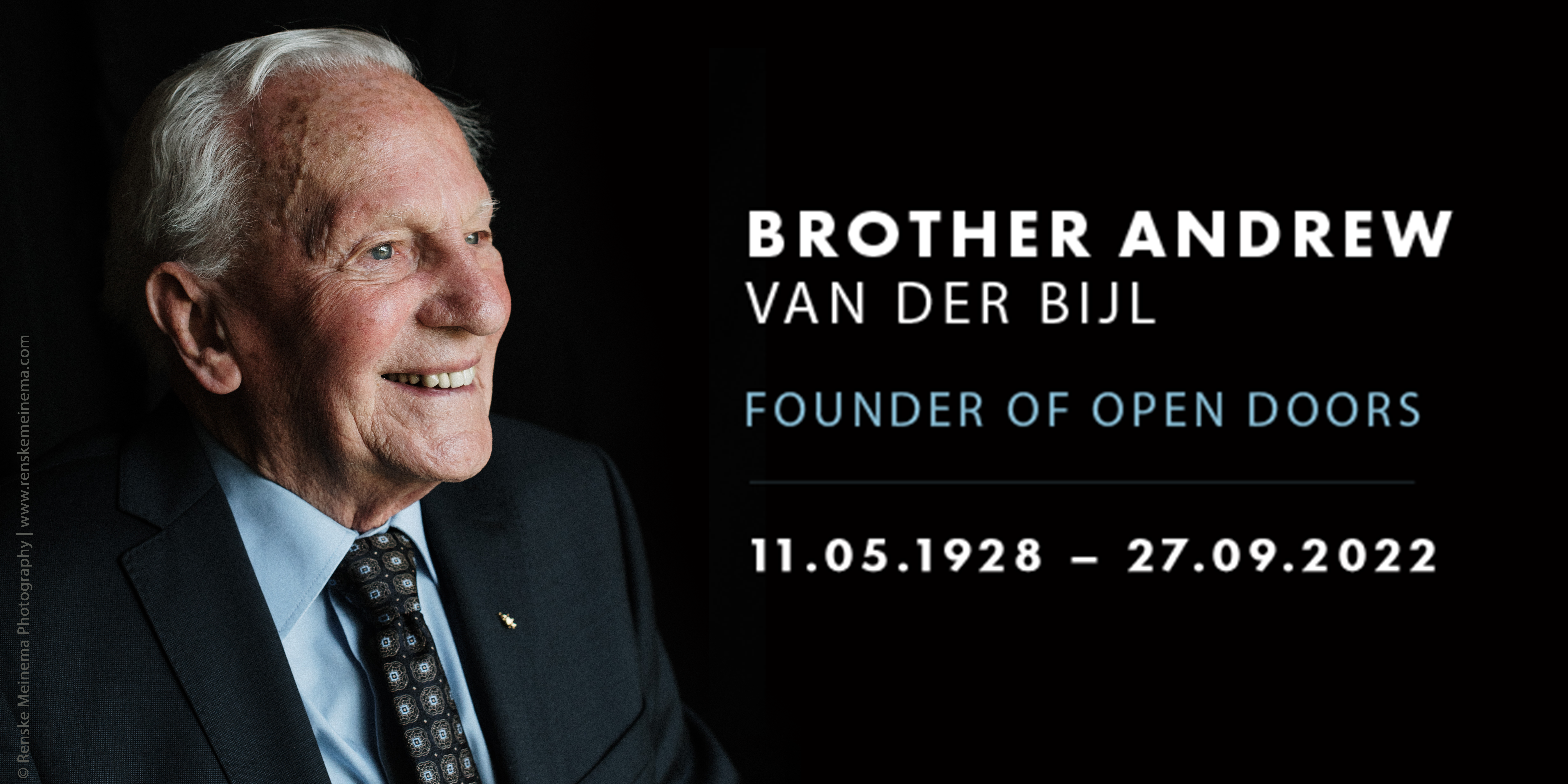 Brother Andrew, whose clandestine Bible deliveries behind the Cold War Iron Curtain earned him the title of “God’s smuggler” and who launched a global organisation supporting persecuted Christians, died on 27 September 2022 at his home in Harderwijk, Netherlands. Brother Andrew, whose given name was Andrew van der Bijl, was 94 years old.

Brother Andrew was married for 59 years to his wife, Corry, who passed away on 23 January 2018. They lived all of their lives in Holland and are survived by their five children and eleven grandchildren.

The organisation he founded, Open Doors, has 1 400 employees that provide spiritual and physical support to Christians in more than 70 countries who live under government, militant and social threats. They often work as secretly as Brother Andrew did when he brought Bibles to Christians living under the tight grip of communist regimes.

“Brother Andrew – a servant of the Lord, father, grandfather, our brother in Christ and the much loved founder of Open Doors – has left us today for his eternal home in heaven,” says Open Doors International’s chief executive officer, Dan Ole Shani.

“He lived for Christ and has died in Christ. We remember his family at this moment and extend our deepest condolences to them all. We pray for God to comfort and strengthen them with His love.” 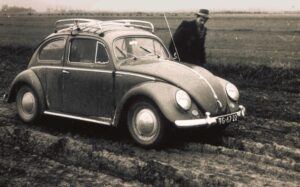 Born in 1928 among the villages of Holland’s canal-laced peninsula that reaches northward from Amsterdam into the North Sea, Brother Andrew grew up during the rise of Nazi power in neighbouring Germany. After enduring the German occupation during World War II, he joined the Dutch Army in 1946 to help put down the rebellion in the Dutch East Indies, now Indonesia. He returned home in 1949 with a bullet-shattered ankle and no idea what to do with his life.

An increasing devotion to God led him to a missionary training college in Scotland, from which he emerged in 1955 with an invitation to a communist youth rally in Poland. There he delivered a suitcase full of Christian tracts and discovered that churches behind the Iron Curtain were isolated and in need of encouragement. In subsequent years during return visits to Eastern Europe, he met Christians whose services, leaders and access to Bibles and Christian literature were being squeezed by the authorities.

His 1957 border crossing into Yugoslavia and other Iron Curtain countries in a bright blue Volkswagen Beetle stuffed with illicit Bibles is memorialised in his 1967 autobiography, God’s Smuggler. It is the first of 16 books written by Brother Andrew, which sold more than 10 million copies and has been translated into more than 35 languages.

The Bible smuggling reached an apex in June 1981, when a 20-man Open Doors crew nosed a custom-built barge onto the China coastline under the cover of darkness. They floated one million Bibles contained in 232 packages, each weighing a ton, to a small, silent army of waiting Chinese Christians, who spirited them into the country.

“Our mission is called Open Doors because we believe that all doors are open, anytime and anywhere,” Brother Andrew often explained. “I literally believe that every door is open to go in and proclaim Christ, as long as you are willing to go and are not worried about coming back.” His travels logged an estimated one million miles through 125 countries. 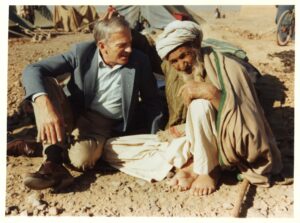 After the fall of the Iron Curtain, Brother Andrew turned his attention to the Islamic World, saying that the rapid spread of Islam posed the greatest challenge yet to the Christian Church worldwide. His travelling shifted mostly to the Middle East and South Asia. He had private meetings with leaders of several Islamic fundamentalist groups. He was one of the few Western public figures to regularly go to these groups as an ambassador for Christ.

In the face of growing Islamist violence towards Christians across the Middle East, Persian Gulf, Northern Africa and Southeast Asia, Brother Andrew preached against retaliation.

“When we have an enemy image of any political or religious group or nation, the love of God cannot reach us to call us to do something about it,” he said. He frequently turned the word “Islam” into an acronym for “I Sincerely Love All Muslims”.

Queen Beatrix of the Netherlands knighted Brother Andrew in 1993. In 1997, he received the World Evangelical Alliance’s Religious Liberty Award, recognising his lifetime of service to suffering Christians and his passion for spreading the Gospel. In 2003, he received the Heritage of Faithfulness Award from the Christian Association of Senior Adults, in California.

However, Brother Andrew said he was proudest of being named a “Blood Brother” of the Apache Indian tribe in 1980s. As part of the ceremony, he was given an Apache name that means “He who breaks through the lines”.

In addition to distributing Bibles worldwide, Open Doors provides spiritual development, economic relief, literacy and vocational training, trauma counselling and other support services in countries where it is most dangerous to live as a Christian. 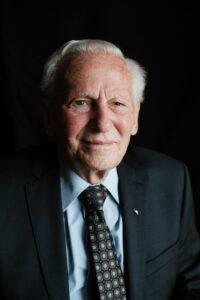 Lynette Leibach, executive director of Open Doors Southern Africa, says Brother Andrew has had a profound influence on the generations he has been a part of and he will be dearly missed. “We are grateful for Brother Andrew’s faith, obedience and example. His courage and determination brought the reality of the persecution of Christians into the public eye.

“He leaves a growing legacy in the global ministry of Open Doors, reaching millions of the most persecuted Christians in over 70 countries annually. God’s Smuggler, which recounts his life and ministry, continues to inspire readers to act as a voice for the persecuted Church.”

According to Lynette, research shows that more than 360 million Christians are facing high levels of persecution and discrimination today – which means there is much more to do. “We want to continue the journey he started, working out the shared vision of engaging Christians everywhere in strengthening the most persecuted so that the global Church remains God’s faithful witness to the world.

“Today, a network of believers continues to faithfully answer the call to pray for, be with and give to support our persecuted family of faith so they can continue to represent the Kingdom of God in their communities and nations despite persecution. May we be encouraged and inspired in our walk of faith by the faith of those who’ve gone before us, like Brother Andrew.”

Open Doors Southern Africa (ODSA) forms part of the Open Doors International ministry, which serves persecuted Christians in over 70 countries across the world by delivering Bibles and Christian literature, visiting persecuted Christians, discipleship and training, offering emergency aid to victims of persecution and natural disasters, and speaking out and raising awareness through advocacy.

Photo 1: Brother Andrew on the road with his Volkswagen Beetle.

Photo 2: Brother Andrew with a refugee in Peshawar, Pakistan.

Photo 3: Andrew van der Bijl or Brother Andrew, as he is fondly known.