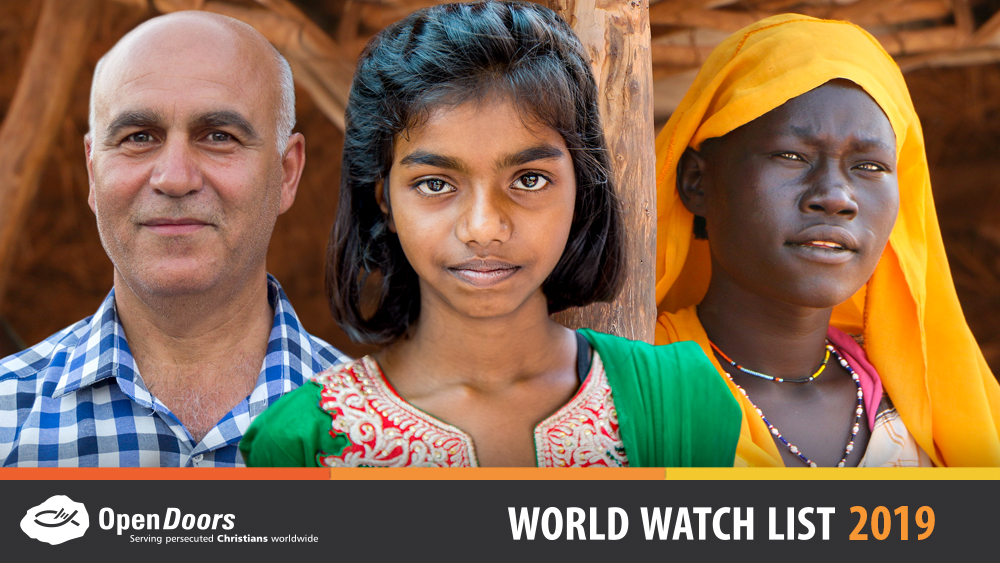 Five years ago, North Korea (#1) was the only country categorised as ‘extreme’ for its level of persecution of Christians. This year, in the Open Doors World Watch List for 2019, same as in 2018, 11 countries score enough to fit that category.

The 2019 World Watch List (WWL) is the latest annual survey of 150 countries monitoring how difficult it is to live as a Christian. The overall trend in this year’s list is that almost half (73) of the countries showed extreme, very high or high levels of persecution. A year earlier, it was 58 countries.

The WWL, produced by global ministry, Open Doors International, and based on extensive surveys from internal and external experts, peers behind the global headlines of cases such as Pakistani, Asia Bibi, and Protestant pastor, Andrew Brunson, now freed from a Turkish prison, to find out how difficult it is to live as an active Christian in daily life.

In these 73 countries, Open Doors says its figures equate to 1 in every 9 Christians globally experiencing ‘high’ levels of persecution. Last year it was the equivalent of 1 in 12. However, across Asia (according to the UN definition, including the Middle East), it drops to 1 in 3, while across Africa, it is 1 in 6, and in Latin America, 1 in 21. In summary, Open Doors International estimates that, in the Top 50 countries of the WWL, around 245 million Christians experience ‘high’ levels of persecution.

Christian persecution is defined by the World Watch List methodology as, “any hostility, experienced from the world, because of one’s identification with Christ. This can include hostile attitudes, words, and actions toward Christians.” The research methodology further also distinguishes two main expressions of persecution as, squeeze (the pressure Christians experience in all areas of life) and smash (plain violence). While smash can be measured and tracked through the reporting of concrete incidents, squeeze is documented by discerning how Christian life and witness is placed under pressure in five specific spheres of life. The five spheres are private-, family-, community-, national- and church sphere.

The WWL, seen as the most authoritative list of its kind, has been produced since 1993 and is externally audited by the International Institute of Religious Freedom (IIRF). “The results of the Open Doors World Watch List 2019 are accurately presented within the parameters of precision reached in the processing of information. … The documentation mechanisms have been improved and the number of countries examined in-depth and presented has again been substantially increased which leads to a better coverage of sub-Saharan Africa, as well as Latin America and Europe,” the IRRF audit statement says.

From a global perspective, the 2019 World Watch List shows that persecution comes from different avenues: from a believer’s family, friends, fellow-villagers and work colleagues, community councils, local government officials and from police and legal systems. When looking at gender, the research shows how Christian women and girls face more persecution pressure in family and social spheres, while men and boys are more likely to experience the brunt of pressure from the authorities or militias.

“This statistical evidence and research show that Christians persecution continues to rise. This reiterates the importance of Open Doors’ work in strengthening the persecuted Church globally,” said Jan Gouws, Executive Director of Open Doors Southern Africa. “The yearly World Watch List reveals the new trends in Christian persecution and helps our organisation to know where to focus our work.”

Some Highlights of the 2019 Open Doors World Watch List

New laws in China (#27) and Vietnam (#20) seek to control all expression of religion. Persecution in China is the worst that it has been in more than a decade; some even say since the Cultural Revolution ended in 1976.

India (#10) is at ‘extreme’ and China at ‘very high’ levels of persecution and these countries are home to two of the world’s most numerous Christian populations, one in a secular democracy and the other in a Communist state – both facing unprecedented persecution – albeit expressed in very different ways.

Nationalistic governments such as India and Myanmar (#18) continue to deny freedom of religion to their sizeable Christian minorities, sending the very clear message that to be Indian, one must be Hindu, or to be Burmese one must embrace Buddhism.

Southeast Asia has seen a rise in Islamic extremism where suicide bombers in Indonesia (#30) attacked three churches in one day.

In the northern and Middle Belt of Nigeria (#12), more than 3 700 Christians were killed for their faith – almost double the number of last year (an estimated 2 000) – with villages completely abandoned by Christians who were forced to flee, as their armed attackers then moved in to settle with impunity. Of the 4 136 deaths, directly related to the Christian faith, which the list reports for the Top 50 countries, Nigeria alone accounts for about 90% (3 731).

Extreme persecution also comes at the hands of radical Islamic militias, such as in Egypt (#16) – where the Islamic State in Sinai vowed in 2017 to ‘wipe out’ the Coptic Church – as well as in Libya (#4) and many other sub-Saharan countries.

Latin America, not considered by many to be a place of Christian persecution, features countries like Mexico (#39) and Colombia (#47) on the 2019 World Watch List, where Christians experience persecution that mainly comes when church leaders or Christians challenge corruption, cartels, and indigenous beliefs.

For more information about the 2019 Open Doors World Watch List, you can join us for our Facebook Live event happening on the 16th of January from 13h00, Join us here: https://www.facebook.com/OpendoorsSA/