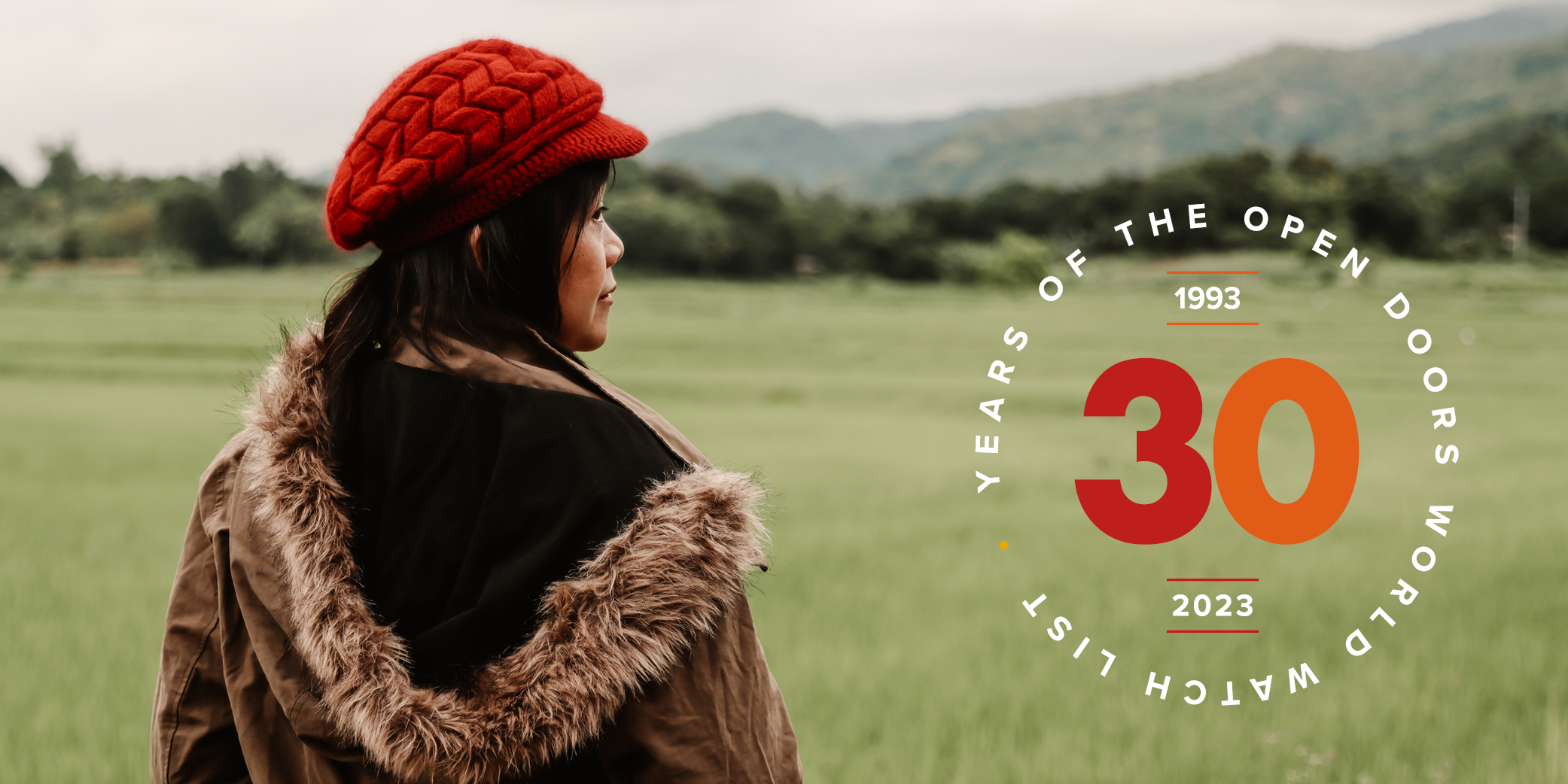 Open Doors International released its 2023 World Watch List (WWL)* on 18 January. This annual list, which is now in its 30th year, shows the top 50 countries where Christians experience the worst persecution for their faith and creates awareness of the hardships that persecuted Christians face every day.

In this worldwide survey that monitors how difficult it is to live as a Christian, the overall trend shows that the persecution of Christians has risen at an alarming rate all over the world, especially in Africa.

During the past week, several shocking incidents of persecution in Africa reached the news headlines: A bomb killed at least 17 people and injured about 20 others at a church in the North Kivu province in the Democratic Republic of Congo, about 50 women were abducted in two incidents in Burkina Faso and another church leader was brutally killed in Niger State, Nigeria, while several worshippers were kidnapped in Katsina State.

This year records the highest levels of persecution since the first list was published 30 years ago, and in recent years has plotted a steady increase. Today, more Christians are murdered for their faith than at any time in the last 30 years.

The WWL found that more than 360 million Christians suffer extreme or very high levels of persecution and discrimination for their faith – a rise of 20 million since two years ago. In the top 50 countries alone, 312 million Christians now face very high or extreme levels of persecution. This number represents one in seven Christians worldwide, up from one in eight two years ago – with one in five in Africa, two in five in Asia and one in 15 in Latin America.

Over the 30 years of Open Doors’ World Watch List reporting, the number of countries where Christians face high to extreme levels of persecution nearly doubled from 40 countries in 1993 to 76 countries in 2023.

Some of the biggest concerns on this year’s list are the violence against Christians in sub-Saharan Africa that has reached new heights, the increased persecution and digital control in China threatening the Church, worsening conditions for the Church in Latin America and the continued pressure on the Church in the Middle East.

North Korea (1) is back in the top position after it was dethroned by Afghanistan last year, following the Taliban takeover of this country in 2021. However, before that, North Korea was in the top spot for the previous 20 years (from 2002 until 2021).

This year sees the highest ever persecution score in North Korea. This reflects an increase in arrests of Christians and more underground house churches discovered and closed. Arrest means execution, or life in one of the nation’s horrifically inhumane camps for political prisoners, where prisoners face near-starvation, torture and sexual violence. The new rise comes with the enforcement of the new “anti-reactionary thought law”, which criminalised any published materials of foreign origin in North Korea, along with the Bible.

Despite Afghanistan (9) moving down from the top position in 2022 to the ninth position this year, the sharp drop offers little cheer and persecution in this country remains at an extreme level. The large drop in its ranking is because convert life has gone deeper underground – which created a bigger challenge to obtain verified violence data.

After the brutal Taliban takeover in 2021, many Christians were executed, as the Taliban went door-to-door to root out believers. Many Christians went deep into hiding or fled overseas. In 2022, the Taliban’s focus to root out those with links to the old regime has intensified, more than uprooting the very small number of Christians remaining.

Somalia, which was third in 2022, moved up to the second position this year. It is followed by Yemen in third place, Eritrea in fourth place and Libya in fifth place.

Violence against Christians in sub-Saharan Africa has reached alarming new levels, as violent Islamic militants destabilise the region using extreme violence. It is most extreme in Nigeria (6), where militants from the Fulani, Boko Haram, Islamic State West Africa Province (ISWAP) and others conduct raids on Christian communities, killing, maiming, raping and kidnapping for ransom or sexual slavery.

Sub-Saharan Africa faces a vast humanitarian catastrophe, as a wave of religiously motivated violence nurtured in Nigeria has swept across the region, targeting Christian populations at an alarming rate in countries such as Mali (17), Burkina Faso (23), Niger (28) and Cameroon (45). Signs of jihadist expansion are also clearly visible in Mozambique (32), the Democratic Republic of the Congo (37) and other countries.

Religiously motivated killings in Nigeria have risen from 4 650 last year to 5 014 – a staggering 89% of the international total. Hundreds of thousands more have been forced into internal displacement or have become refugees. This year has also seen this violence spill over into the Christian majority south of the nation.

Violence is only part of the equation, with ever increasing Islamisation putting extreme pressure on many Christians in their everyday lives. Nigeria’s government continues to deny this is religious persecution, so violations of Christians’ rights are carried out with impunity.

Jihadist violence is becoming commonplace across sub-Saharan Africa, with 26 countries in the region scoring very significant levels of persecution. The Islamist campaign of terror in the region is fuelled by a lethal mix of trafficking, changes to the political climate and an influx of mercenary soldiers from the shadowy Kremlin-backed Wagner Group.

The combined total score for violence for all 26 sub-Saharan Africa countries that scored at least 41 total points on the Open Doors WWL, increased by 8%. Half of those countries have violence scores in the “extremely high” range.

China and beyond: The death of universal human rights

Lynette Leibach, executive director of Open Doors Southern Africa, says: “It is humbling that this 30 years’ anniversary represents millions of families, women, men, youth and children specifically targeted to pay a high to extreme cost for their faith in Jesus and Christian identity.

“It is a dark picture – still it highlights the urgency and opportunity of finding, connecting with and standing alongside the local Church in these countries to ensure that our brothers and sisters can courageously remain as lightbearers in the dark. The findings demand action.”

About the WWL and how the figures are collected

The first WWL was produced in January 1993. Countries’ overall persecution scores are an amalgamation of six different scores: Pressure levels in private life, family life, community life and national life, and of church communities, along with violence levels. This year’s list covers the period from 1 October 2021 to 30 September 2022.

Released at the beginning of each year, the list uses extensive research, data from Open Doors field workers, their in-country networks, external experts and persecution analysts to quantify and analyse persecution worldwide. Each edition is certified by the International Institute for Religious Freedom.

For any questions about the 2023 World Watch List, the research methodology or to arrange an interview, please contact Elizabeth Botha, media officer, at [email protected], 083 227 8164 or 011 888 9341 (interviews can also be arranged on request with some persecuted Christians in sub-Sahara Africa).

Open Doors Southern Africa (ODSA) forms part of the Open Doors International ministry, which serves persecuted Christians in over 65 countries across the world by delivering Bibles and Christian literature, visiting persecuted Christians, discipleship and training, offering emergency aid to victims of persecution and natural disasters, and speaking out and raising awareness through advocacy.

*WWL country rankings in brackets throughout the document.