skip to Main Content
Mimi celebrates Christmas with her chickens

Christmas is looming, but for Christian children in Iraq it is often a bleak time with not much to celebrate. But believers like Mimi (12) and her mother, Nadia, from the rural area of Shekhan, have found new hope for a future in their country. 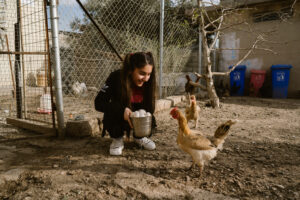 Mimi says she loves Christmas: “We play songs and decorate the house with Christmas decorations. Glory to God in the highest! Peace on the earth, goodwill!” The famous Christmas song seems to fit in perfectly with the peaceful situation at their farm.

Mimi was only four years old when persecution drove her family out of their house. They had to flee in the middle of the night, not taking anything with them, when ISIS extremists attacked the village. When ISIS was defeated in 2017, the family returned to the Nineveh Plains. But the situation was tough, and Mimi’s parents were struggling to make ends meet.

With the support of Open Doors’ local partners, the family now has a future in Iraq. Mimi’s family received a microloan that they used to start their own farm and buy sheep and other animals for breeding.

Mimi loves her chickens and visiting the chicken coop to collect eggs and, most importantly, greet her favourite chicken, Loulou. “She is my best friend; I love her colours,” she says. “I love this farm and want to take it over from my parents when I am older. For now, I take the eggs to my mother, who might be able to use them for the Christmas lunch.”