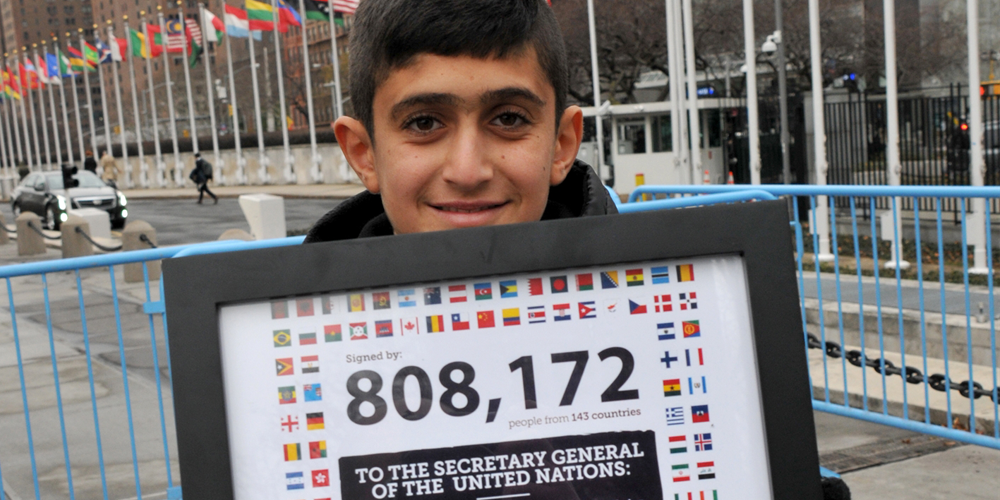 In 2016, Open Doors launched the One Million Voices of Hope petition. The petition formed part of one of Open Doors’ global initiatives, the Hope for the Middle East campaign, which aims to bring hope and a future for Christians and other religious minorities in the Middle East. The #MillionVoices petition aimed to mobilise the global Church on behalf of Middle Eastern Christians and gathered a total of 808 172 signatures from 143 countries—that is the most signatures ever gathered by Open Doors! (Main image: Noeh outside the UN in New York with the petition certificate. 808 172 people from 143 countries signed the petition.)

What were the signatures used for?

An Open Doors team, along with 12-year old Noeh, his father and church leader, Behnam (all three from Iraq), engaged in a series of high-level meetings at the United Nations (UN) in New York in December 2017. Here, they presented the UN Secretary-General’s office with the petition. The office also received a special gift from Noeh… his marbles, covered in dust and misshapen. It was the only thing he found left in his home back in Qaraqosh after it was destroyed by ISIS. “This is probably the nicest Christmas gift we’ll receive this year because it’s from your heart and your home,” was the words of Kyoko Shiotani, one of the UN officials.

Other meetings with high-ranking officials included Mike Pence, the United States (US)’s vice-president and also a meeting in London with Theresa May, the prime minister of the United Kingdom (UK). At the meeting, Syrian church leader, Daniel, presented Theresa May, with a Bible which extremists burnt. He said, “We can re-print more Bibles, but if my people burn, who will be there to read it?” She was so moved that she mentioned it in parliament in February, saying that they would investigate what could be done for persecuted Christians.

What effect has the campaign had thus far?

While one of the key aims of the campaign is to secure a future for Christians and other religious minorities in the Middle East, it also seeks to encourage the local Church in the Middle East, through the support and prayers of Christians all over the world. As Behnam said, “These three and a half years were a big miracle… because we discovered that the church in all the world was with us.”

The efforts of the campaign are already visible. In January, the US and UN pledged $55 million to rebuild Christian areas in Iraq, with Open Doors being one of only 12 organisations consulted on how to spend this funding. The UK government also recently announced funding to help involve minorities in reconciliation projects in Iraq. Both these outcomes are answers to the petition and prayer!

In addition to the signatures, Open Doors’ supporters also supported the cause through donations which were used to restore 1 500 homes in Qaraqosh. Christians in Iraq are truly grateful. “I thank you for signing this petition to help the Christians and the people of Karamles. I hope someday you will be able to visit us when we have peace,” said Noeh.

What do we do now?

The Million Voices of Hope petition was part of a seven-year campaign to create awareness, raise prayer and support, and to advocate on behalf of the Church in Syria and Iraq—we are only getting started! The petition may be complete, but the campaign is not over. So, please continue to pray for the Church in the Middle East. Pray for the success of planned projects as well as for those living in peaceful areas, those caught in war and those living in fear. Together we can continue to raise them up before our Lord. Thank you!